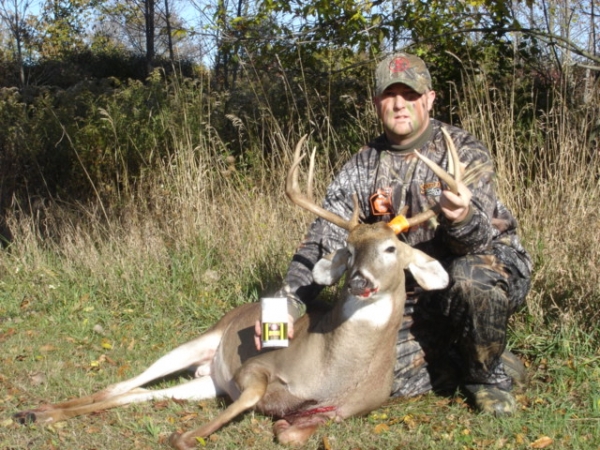 Pro-Staffer Eric C had a successful hunt in Oct 2009.

Here is his story.

On Oct 12th I had a busy schedule with not much time for a morning hunt before I had to be at work, I would only have 2 hours at the most. My normal hunting area is a 30 min drive from my house which would not leave anytime for a hunt, as I would have to leave the stand during prime time possibility scaring bucks out of the area, not wanting to wreck the area I had to come up with plan "B" or not go hunting.

I called my future father in-law to see it I could hunt out behind his house, he has 40 acres 5 minutes from my house. The property had not been hunted yet this year, as he had torn his ACL, walking and climbing trees was out of the question. Luckily Brian said I could hunt there, he even suggested which stand to hunt in.

Up on reaching the property in the darkness I was unsure of which trial to take to find the stand as I had never been to that stand before. I remembered a stand that I had saw during last years rifle hunt. Heading to find the stand in darkness I knew I was close, but what tree was it in. I had to break out the flashlight and start shining it up in the trees to find the stand, all the while thinking great I am going to spook any buck away with the light. Finding the stand I back tracked to the field edge and made a mock-scrape under a oak limb 20 yards from the stand. I placed a good squirt of Buck Stops 200 Proof in the scrape and dribbled a few drops on the overhanging branch. By now it is starting to get light, I hurried to get up in the stand.

After getting settled in I reapplied Scent Stop scent eliminator on my clothes, while putting the spray away I felt my bleat can. Thinking what the heck I bleated a couple times. About 80 yards away I saw a flash of antlers in the tall grass. Grabbing my bow I got ready, 20 minutes later after not seeing any movement and fully light now. Where did he go? Grabbing my grunt call I softly issue a couple grunts. I see him and another buck coming from directly downwind of me at about 75 yards. Oh NO buck fever is setting in.

As if he was tied to a string, along with the smaller 8 point they came right to the mock-scrape. As he was smelling the scrape he gave me the perfect shot. The rest is history. With out a doubt the Buck Stop 200 Proof along with the calls made this hunt a success.

By the way I made it to work with 15 minutes to spare.